An animated video for business is a great resource for your marketing campaign, because it will allow you to promote what you’re selling in a matter of a few seconds and in a very appealing way. But in order to enjoy its many advantages, you need to consider the explainer video production as the foundation of the whole process. This involves having a clear set of goals and having a good grasp of what your audience needs to watch out for.

Nonetheless, if you don’t take its production seriously, you run the risk of missing the opportunity of developing a great marketing campaign. But don’t be afraid, because here at Yum Yum Videos, we’ve got your back! In this post we’ll explain how you can avoid the most common mistakes that may damage your marketing video production, so please follow along! 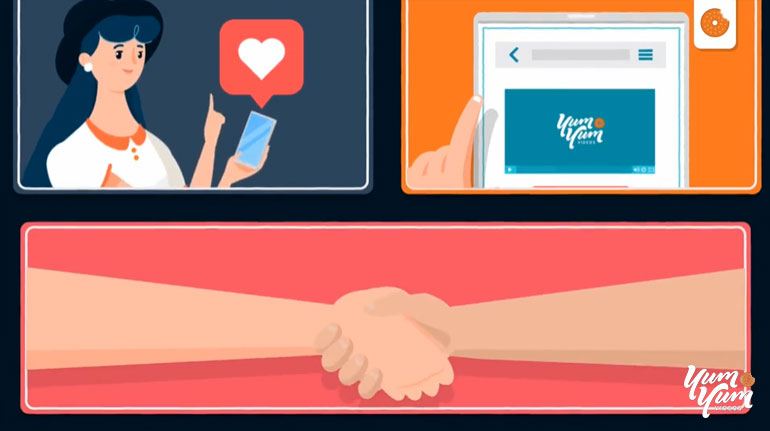 Make it quick, make it fun, make it great!

The Internet is filled with content. Just take a glimpse at any social network and you will be overwhelmed with the amount of information that’s been posted. You need to find a way to stand out from the rest by making your video brief and interesting.

We have already established that around 85% of viewers will be able to watch a whole 30-second video, but only half of them will watch it entirely if lasts less than a couple of minutes. Your video can’t be as short as 30 seconds and it can’t also be as long as 2 minutes, so you guessed it right because the answer lies in the middle: 90 seconds, baby!

Putting your time concerns aside for now, you need to be in charge of the content shown in those 90 seconds. You need to compress interesting and appealing information so you can get people’s attention and also retain it so they can hear what you have to say. It is one thing to catch your viewers’ attention, but it’s a whole other task to keep their interest!

The length of the script is what will determine the duration of your video. The equation is rather simple: 160 words on a script equals around a minute in video time. So if you want to make a 90-second video, then at Yum Yum Videos, we recommend writing a script of around 240 words.

Check out this fun animated video for business so you can see a good example of what an eye-grabbing video looks like!

For any audiovisual material, words are the starting point. The quality of your video will depend directly on the quality of the story. Even legendary filmmakers like Steven Spielberg and Stanley Kubrick have made bad films. The reason behind those flops, even when they made those movies with undeniable talent, lies at the heart of the stories. Those films were based on poor tales.

That being said, the essence of any movie is its script. Hubspot even considers the writing of the script as “the most important part” of the whole video production process. The structure of the script needs to be solid as a rock because it is the foundation of your video. The stronger your words are, the stronger the story will become. And the more detailed the parts of the script are, the clearer the content of those sections will be.

At the moment of writing the story, you need to be aware of who will be consuming it. At the end of the day, we’re all writing for an audience. You need to be careful to not sound like too much of a salesman, instead you need to come off as a helper –you’re offering a solution to your audience. This is your mission as a marketer –to provide assistance.

The minute you have an outlined structure and a well-thought script,you can start making your video. Remember Spielberg and Kubrick: you can have the greatest talent but it will do no good unless you have a killer story.

If you want to know more about how to write an amazing script for your animated video for business, you can download our free eBook: “How To Write An Explainer Video Script (A Step-by-Step Guide)

Check out one of our videos, in which we try to describe how this product works without sounding too techie:

Your explainer video can be powerful: you just need to make it as customized as it can get. You can only use an idea effectively if you fill it with substance. In other words, you need to inject interest into it. By customizing your story with impactful content, the more awesome it will become!

Why all the trouble? Because when you put your video out there in the Internet ether, you’re automatically competing with a huge galaxy of content produced by other people. So how can you stand out from the rest? By becoming memorable! So you have to figure out a way to make a video that aims at the emotional core of your audience.

It is intimidating, trust me, but it is possible. You just need to craft a story that gets into your audience’s heart. The power of making a customized video simply lies in the fact that anyone who’s watching will feel that the story has been written specifically for them. And you can only achieve this by paying attention to what your audience needs to hear.

The other great thing about producing a custom video, is that it will provide benefits to your brand. If someone plays your video and thinks it’s cool, then that opinion will end up connected to your brand, giving it prestige and respect. All of this may sound too abstract, but believe me, it will translate into higher conversions and higher sales!

If you want to check out a good example of what a custom video looks like, you can watch this next video

When we consume any kind of material online, our minds tend to recognize when a lot of hours and sweat has been put into it. In other words, we know when we have been witnesses of hard work being made. And that recognition, especially when it’s that positive, will increase the value of the reputation of your brand.

When you look at Apple or Coca-Cola commercials, for example, there is no doubt that they have taken their work seriously and you end up, not only appreciating it, but also having both brands in high regard and esteem.

That same feeling is what you need to replicate every time someone watches your marketing video. And that is only possible if you make your video with the highest quality. This will take a lot of time and you need spend some money on it, but at the end of the day you need to consider it as an investment. The features of your brand are determined by the quality of its products. And your explainer video is one of them, so you better make it good!

This video was selected by Hubspot as one the best explainer videos ever. And we made it!

It’s all about your style, baby!

Whenever you’re trying to sell something, you’re going to inevitably be talking about something that’s been talked about before. Nonetheless, this doesn’t mean that you can’t be original. On the contrary, this implies that you need to sell your idea in the most original way possible.

You need to be stylish. You need to use everything at your disposal when you make your animated video for business –tone, colors music- to make an eye-grabbing video. Whenever you see pictures of stylish people, you can identify that detail as the core of their success. Every single aesthetical decision has been made with a lot of attention put intohow everything works together. These selections are what made a final product appealing.

Watch our nice video on how to choose the best explainer video style for your brand. We managed to put it at the top of YouTube for the main keywords of explainer videos!

If you want to know the secrets of how we were able to conquer YouTube, you can download our free eBook How to Rank #1 in YouTube.

A great animated video for business can only be made through an equally astonishing explainer video production. It’s not rocket science, after all: you just need to tell an interesting story, tailor made to what your audience needs to see, and you need to do it in such a way that exudes quality and effort in a stylish way. You need to work hard if you really want to enjoy its benefits. The success of your video is a choice, you better make the greatest ones as possible!